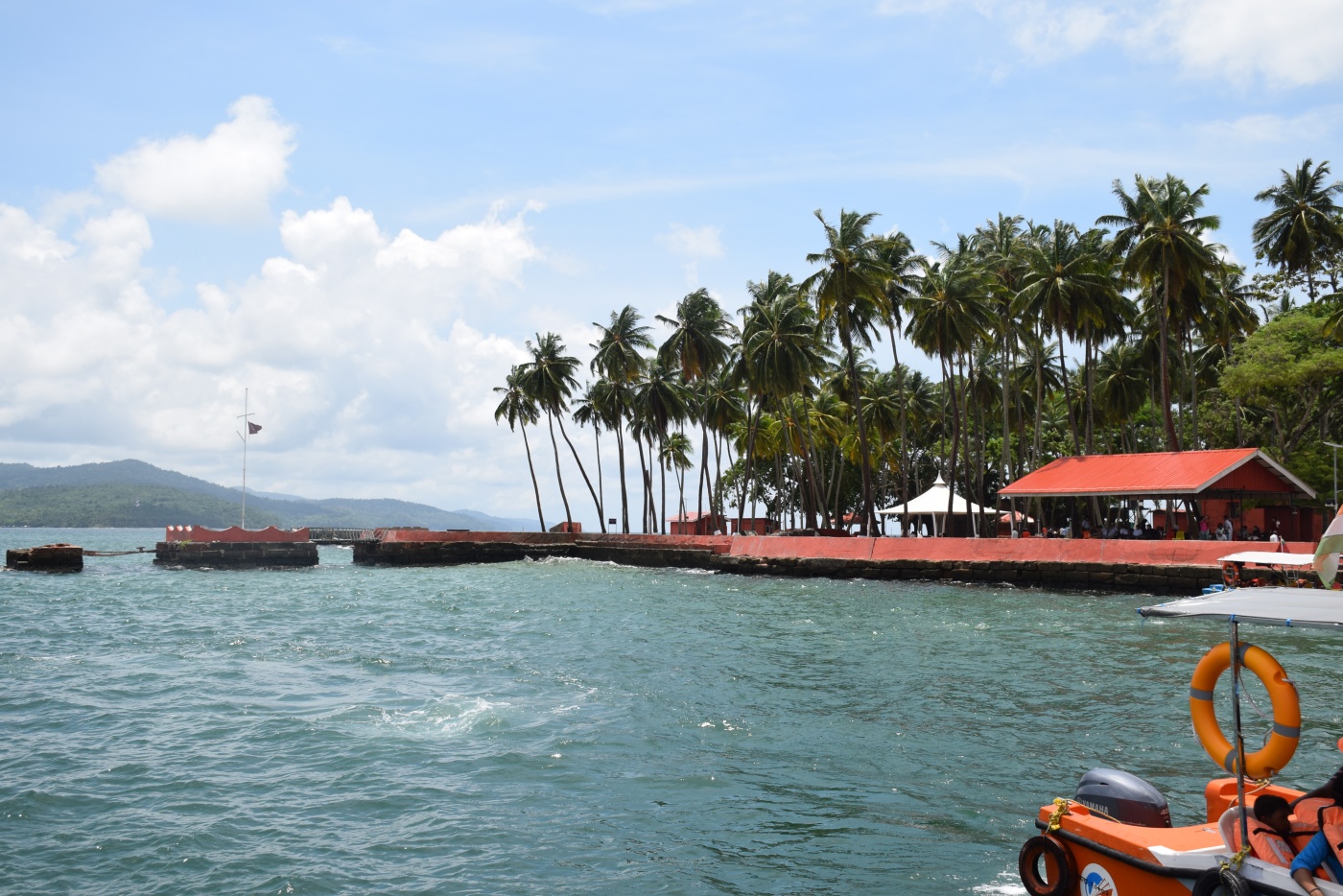 Just before landing, the sight from our flight was of the Island surfaced all over the dark beryl sea looked like as if pearls scattered and the beautiful artistic cloud structures as white soft cotton, ‘ld make anyone gaze in awe at the open face of heaven on earth. The features are amazingly crafted and highlighted by the almighty. All these seen from the window of the plane was making me feel full of gratitude for experiencing such a dramatic scene in front of my eyes and exciting as well, thinking how it will feel like to actually step on one of those islands and explore the ‘unbounded’.

Despite the fact that I am not a big fan of beaches, Andaman Islands stole the show this time, and every single details starting from Limestone caves to the mangroves, from colourful corals to amazing Silver coloured sandy beaches, moreover, it’s weather is never on extreme side because of the moderating effect of the sea with short span of showers after every few hours or so; no wonder why it served as a very important base for Britishers during their ‘Raj‘ in India and one of the brightest shining star of India’s Independence struggle Netaji Subhash Chandra Bose hosted the first flag of independence in this island. It’s Jarawa tribes in the tropical evergreen forests houses plenty of coconut trees all around which is surprisingly relevant to the Indian currency notes. Not only that, it is the ONLY tri-service theatre command of the Indian Armed forces. I felt like it is not only one of the best place to go on a vacation in India but also one can choose to live a good few months to change the taste of living a modern styled metropolitan life and want the charm of countryside lifestyle with basic amenities.

Reciting in mind the poem, ‘To one who has been long in the city pent’.

Starting from Kolkata airport to Port Blair situated at a distance of 1,500km, flights will take minimum 2 hours to reach, we have ship services also available for going there but it takes a lot of time and the journey is inconvenient for few and can be really exhaustive as seasickness is very common. After reaching one can collect traveller’s guide from the helpdesk in the airport itself. The guide provides with three different booklets each about Neil, Havelock and Port Blair, contains all the necessary details about the place along with contact number of the important officials in case of emergency.

Beginning with Port Blair, which is situated in South Andaman has many places where one can travel in the city, the capital of Andaman and Nicobar Islands is the entry and exit point for all. It is also the bustling commercial hub and seat of government establishments. The first place which we visited in the evening was Corbyn’s Cove, the only beach of Port Blair and has various restaurants offering delicious seafood dishes; along with two water sport activity mainly speed boating and jetski.

From the Corbyn cove Beach one can get a clear view of the Snake Island which is famous for different variety of snakes, coincidently the island looks like a snake laying still somewhere in great Bay of Bengal. With very minute amount of distinctive type of vegetation may be found in there. To have a closer view one can get near the Island riding a speedboat but it is not allowed to step into the Island strictly.

Our second day began with a visit to the Cellular jail, which is one of the symbols of great sacrifices of freedom fighters did for our country during the British period. Leave the basic amenities, even drinking water was limited and what could be worse when the limited water available was not suitable for drinking most of the times! Life was made tougher with extraordinary solitude provided to prisoners kept there unlike any other ordinary jail of that time and present where every bit of motivation sucked out by the British jailers leaving no doubt why this place was being called as Kala Pani meaning black water. To pay tribute to those great leaders of independence this jail was converted into a place of National Memorial in 1969 by the Indian Government and every evening now a “light and sound” show is organised by the jail authority to recall the saga of courage and valour which the place had witnessed. Remembering the first line of the show that defines each fighter as very lively and proud person. And the old Sacred fig which stands at the main gate along with a museum which gives a glimpse of the years of India’s freedom struggle.

The architecture of the jail is an example of British intelligence which was commenced in 1896 and ended in 1906. It was built like a structure of a bicycle wheel as shown below with a ring like structure at the centre which was mainly the watch- tower of the jail used for invigilating the prisoners. The front side of each wall faced back side of the other wall and all the cells were made in a row which made communication between the prisoners almost impossible. There were 693 cells each measuring 4.5m x 2.7m with a ventilator at the height of 3m.

Our next destinations were North Bay Island, Ross Island and Viper Island from the Aberdeen Jetty of Andaman. The boat Jaya was ready and we headed towards Viper Island first, we were told by our guide that due to some unavoidable reasons North Bay Island was officially closed for the day, which was of course heartbreaking because the island is known for Snorkelling through which one can witness serene underwater life and the beautiful Coral Reefs, known for their bright and amazing colour combination that awestruck everyone who witnesses with naked eyes.

On the way to Viper Island, we saw handful of islands spread across the sea and a few Indian naval ships on Port Blair, it would take around 25 min to reach there from Andaman.

The scene from the jetty of the ruined building of woman’s jail is the only physical attraction of this place along with the fact that the place witnessed all the harsh treatment of the Britishers on the freedom fighters who used to defy their orders. The jail is located on the top of a small hill from which one can cherish some beautiful scenery of the surrounding sea and numerous small islands.

From Viper Island our next destination was Ross Island, which is an interesting Island for both who loves history along with non-historians layman like us. This is the island which was Britisher’s home before moving on to the main Andaman Island when the earthquake of 1941 rocked it. One can see various ruins of British buildings which were mainly offices, mess, printing office, bakery, Church, water distillation unit, cemetery etc. The cemetery has its devastating memories attached and some of the horrible moments, like when there was lack of proper drinking water which killed so many including infants, after which the distillation units were set up. The Japanese bunkers and canons also made to stand side by side as a memory of the Japanese invasion into these islands in 1942 after world war II. The natural beauties of this island are many many years old banyan trees along with carefree deers and rabbits loiter around  in that area and according to Andaman’s rule no one is allowed to feed those animals which is quite reasonable, let the nature take care of its assets without any artificial intervention. Walking along the shores and feeling the cool breeze of the tides of the sea is a wonderful experience in itself.

Currently, the Island is maintained by the Indian Navy which is also responsible for its safety and security along with the light and music show which is also conducted by the officials from Monday- Sunday except Wednesdays. In all, I would say it would be better if a guide is taken along for narrating the past of the island maintaining proper chronology which will make you visualize the fascinating history of that place right in front of your eyes.

We called it a day and went back to our rooms; although our plan was to visit Neil Island the next day, but nature had different plan for us. We spent the evening exploring around the city. And, we decided to visit the limestone caves near Baratang going through mangroves.

To reach there one also need to go through the great trunk road crossing the reserve forest area, home to Jarawa Tribe (one of the aboriginal tribes of Andamans), with police permission as this tribe is listed as one the Particularly Vulnerable Tribal Groups (PVTG) by GOI.

Tip: Even if you feel sympathetic to the tribals for their uncivilized appearance and begging for food, please do not stop your vehicle to help them as it is strictly prohibited to do so and photography as well, while you are in the forest premise.

After reaching Baratang we booked a boat and went to the Limestone caves. These underground caves are formed by the dissolution of limestones, as rainwater mixes with carbon dioxide present in the air and picks up more of it as it seeps into the soil results into weak acidic solution which dissolves the type of rock (calcite) present in that type of topography (karst topography). There are interesting and fancy features inside the cave formed mainly from stalactites and stalagmites, for example: a tigers mouth or a dropping lotus. As it was quite dark inside the cave it is hard to take good pictures of the place. I request the readers to take a lesson and plan accordingly as one would not want to miss the chance to capture those fancy features inside underground caves ever. There is need of using artificial lights, be prepared.

It was a trip to cherish and some unfulfilled trips to the unexplored islands left due to mercy of nature. But not to lose hope, coz there is always a next time… hopefully ☺️