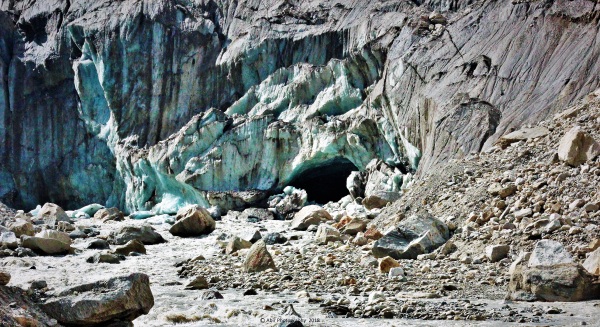 The mission was to trek to the glacier called Gaumukh, a tract of 8km by 24km ice-body, the origin of the holiest of holy rivers Ganges or Ganga, highly revered by Hindu believers over millennia. The final destination of the trek had to be Tapovan, a wide-open meadow at the base of the picturesque Shivaling Peak could only be reached if snaking through the boulders and chunk of icebergs that remained on the surface of the glacier followed by a steep thousand feet climb. At the source, the Ganges named after ancient King Bhagirath, read Gangotri Tales to know the Hindu Mythology involved, as River Bhagirathi and confluences with River Alaknanda at Devprayag to become River Ganga that flows from north of India towards east covering a distance of 2480km to the Bay of Bengal.

END_OF_DOCUMENT_TOKEN_TO_BE_REPLACED

The small hill station Gangotri comprises the holy Temple Gangotri, the highest temple of Goddess Ganga, is one of the ‘Chhota Char Dham’/ ( four adores) highly revered by Hindu pilgrims, is set in the middle of rugged Himalayas of Garhwal region in Uttarakhand, India. The circuit of Chhota Char Dham is completed by other three pious destinations located in the vicinity, namely Yamunotri, Kedarnath and Badrinath which is again among the four Vaishnavite Pilgrimage popularly known as original ‘Char Dham’ ascertained by Adi Shankaracharya. Badrinath being a sacred abode, in the northern region, rest three pilgrimage destinations i.e. Puri, Dwarka and Rameswaram are in east, west and south of the subcontinent respectively. It is believed among Hindus that they should visit these sacred places at least once in the lifetime as inviolable places as these hold the power that sanctifies one by cleaning all sins hitherto performed after birth.